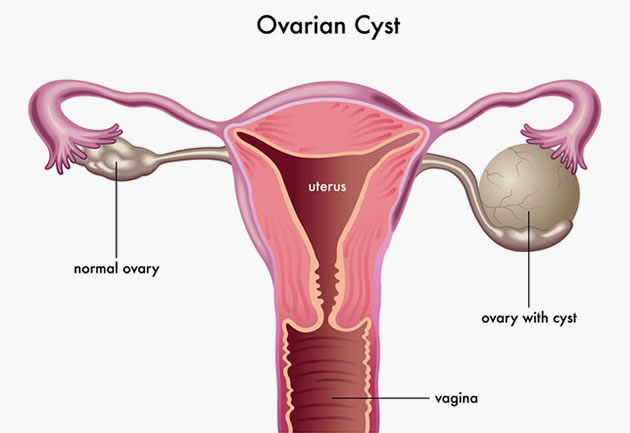 With few exceptions physiologic cysts go away on their own and don't require surgery.

Or Pathologic ? these are abnormal and generally do not go away by their selves.

What is a pathologic ovarian cyst?

These cysts don't serve a function?the majority of them occur in women under 50 and are benign. There are many different kinds of pathologic ovarian cysts ? most are benign. You may have heard of some of these.

Dermoid cyst is one type of pathologic ovarian cyst. These cysts contain many types of cells. They may be filled with hair, teeth, and other tissues that become part of the cyst. They too are generally painless but can become large and often show up on either a pelvic examination or a routine ultrasound.

Endometriomas. These cysts form in women who have kista endometriosis. Kista endometriosis occurs when tissue that normally lines the inside of the uterus grows outside the uterus?often on the surface of the uterus, bowel, bladder or ovaries. When the tissue becomes attached to the ovary it tends to grow rapidly and can produce large ovarian cysts. These cysts can produce pain, infertility and even make it difficult to have sex.

Cystadenomas. These cysts form from cells on the outer surface of the ovary. They are often filled with a watery fluid or thick, sticky gel. They can become large and cause pain. Most often, however, these cysts do not cause pain unless they twist or rupture.

Polycystic ovaries. These cysts are caused when eggs mature within the "little balloons" but are not released. The cycle then repeats. The sacs continue to grow and many cysts form. Women with polycystic ovaries often have other issues which may include irregular periods and infertility.

What Are The Symptoms?

Dermoid cysts of the ovaries are capsules of tissue which are covered in a thick layer of leathery skin. They can grow on one or both ovaries. Most do not cause symptoms, however if the tumor grows it can result in complications. Possible complications include:

Dermoid cysts are rarely a medical emergency. The only time they are likely to become so is where ovarian torsion occurs.

Dermoid cyst of the ovary : A dermoid cyst develops from a totipotential germ cell (a primary oocyte) that is retained within the egg sac (ovary). Being totipotential, that cell can give rise to all orders of cells necessary to form mature tissues and often recognizable structures such as hair, bone and sebaceous (oily) material, neural tissue and teeth.

Dermoid cysts can range in size from a centimeter (less than a half inch) up to 45 cm (about 17 inches) in diameter. These cysts can cause the ovary to twist (torsion) and imperil its blood supply. The larger the dermoid cyst, the greater the risk of rupture with spillage of the greasy contents which can create problems with adhesions, pain etc. Although the large majority (about 98%) of these tumors are benign, the remaining fraction (about 2%) becomes cancerous (malignant).

Removal of the dermoid cyst is usually the treatment of choice. This can be done by laparotomy (open surgery) or laparascopy (with a scope). Torsion (twisting) of the ovary by the cyst is an emergency and calls for urgent surgery.